If you use Sky Broadband and Kodi has not been working recently, then you are not alone. A lot of people have reported problems watching Kodi streams whilst using Sky broadband.
You may have noticed that more and more movie or TV show streams seem to be down these days. You search for the latest move and click ‘Play’, only to be shown a ‘stream unavailable’ or ‘connection error’ message. You try the next available stream, only to be confronted with the same message.
Eventually, you may have become unable to find any working streams at all. This can be incredibly frustrating, as you don’t know if the stream is down, or if it’s a problem with your connection.

Many Kodi Streams Are Blocked On Sky.

That’s far from an exhaustive list however, it is likely that many move video streaming services will be blocked by Sky into the future.

Why Does Sky Block Kodi Streams?

Sky don’t block streams just to be mean. They do it as they were forced by the courts to prevent copyright infringement by blocking people’s unrestricted access to copyrighted content. In an attempt to comply with the courts, Sky have actively blocked their customers from accessing a growing list of domain names and IP addresses.

As well as blocking access to video streams, Sky are also prohibiting access to torrent and filesharing websites. What’s more, Sky (or a team contracted by Sky at least) actively troll the internet looking for websites that discuss circumventing their measures.

The simplest test you can do to see if there are active blocks on your current broadband connection is to try to visit a website that they are likely to have restricted.
At the time of writing, Sky are actively blocking access to www.thepiratebay.org and redirecting visitors to a warning message. Click on the button below to attempt to view www.thepiratebay.org.

If you see a Sky ‘Access Blocked’ message or other ‘access denied’ type messages, then you are being prevented from accessing at least that website, and quite likely popular movie video streams too. 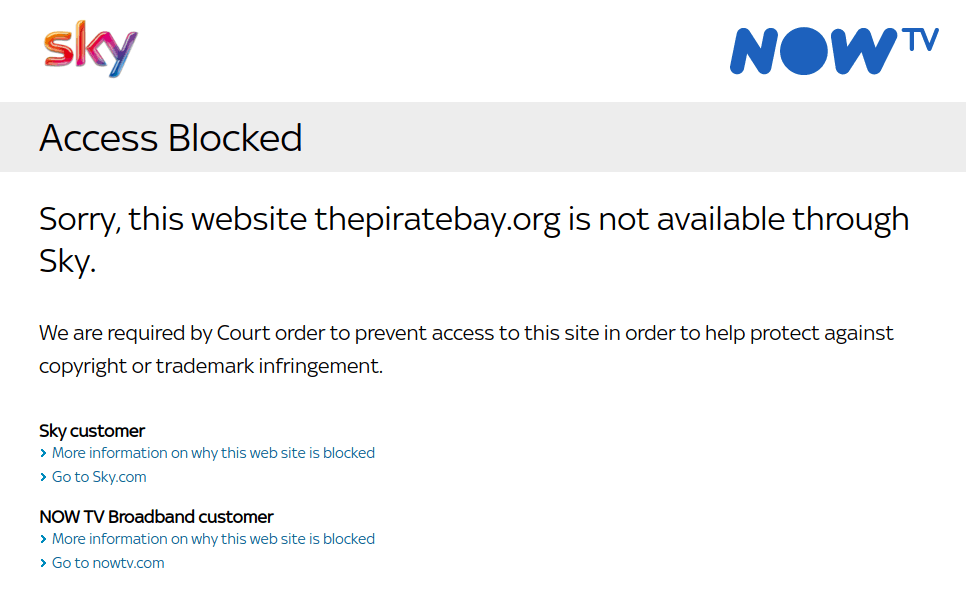 If The Pirate Bay loads up, or any website loads at all that isn’t a block, then you’re probably not being blocked and video streams probably aren’t being actively blocked either.

If the web browser connection times out or if you see a DNS error of some sort, then access to pirated material may or may not be blocked.

If your connection is being blocked by Sky or any other broadband ISP, then there are some ways around the block. Follow one of the techniques below to gain access to Kodi streams if your ISP is blocking them.

The first thing to rule out is Sky Broadband shield. Fortunately, you can just turn this off. Sky Broadband Shield is a parental firewall aimed to help parents prevent their children from accessing adult content.

Here’s how to turn Sky Broadband Shield off, in case it’s blocking access to your Kodi streams.

Possibly the most reliable way around Sky’s firewall is to switch broadband providers completely.

To find out if any particular ISP blocks video streams, try calling their customer service number and asking “Do you block any online websites or video streams?”. You can ask this without giving away any personal information if you’re worried about being identified.

Invest in a VPN

There are a wide array of private VPN providers on the market, each with their own particular perks and features. They’re all pretty much the same though, at least if you’re just looking to avoid your ISP from blocking traffic.

When subscribing to a VPN service, compare monthly rates between subscription lengths. Sometimes registering for a few years in one go can achieve big savings per month compared to smaller plans.

This is only worth doing if you have a generous data limit on your mobile plan, or if you’re fortunate enough to have an unlimited 4g plan. Be sure to check the details of your mobile phone contract and consider moving to a high data plan if you need to.

There are loads of options these days, so shop around and find what’s best for you. If you are about to switch to another provider, it may be worth trying a 1-month rolling contract at first before committing to a longer contract period to lock in those savings. Some providers, despite having great looking plans for heavy data users, have terrible network coverage.

Most modern smart phones have a built-in ‘Wi-Fi Hotspot’ mode which creates an ad-hoc wireless network. You can connect to this from your laptop and try connecting again to video streams. Unless of course your 4G provider is blocking video streams too.